Realme has revealed the design of the GT Neo that will be introduced on March 31 in China with the Dimensity 1200 SoC. As you can see, the smartphone has a rectangular camera island on the back, which includes three shooters, with the primary unit using a 64MP sensor.

The camera island is aligned with the shiny stripe that stretches across the rear panel’s length and has the Realme logo placed on it with the “Dare To Leap” text. Realme calls this a “Box Logo” design and says it is a tribute to the Cyberpunk culture since that’s the source of the design’s inspiration. 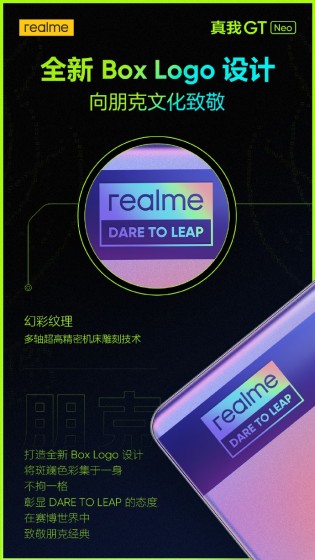 This particular color model we are looking at is named Final Fantasy (machine translated from Chinese), and its back cover adopts a micron-level matte process, which is both rigid and soft and resistant to smudges, according to Realme.

The GT Neo has the power key on its right-side frame and the volume rocker on the left. At the bottom is the USB-C port flanked by a speaker, microphone, and a 3.5mm headphone jack. We don’t see a fingerprint reader on the phone’s back or sides, meaning it’s likely embedded to the screen, confirming an AMOLED panel.

Realme hasn’t detailed the rest of the GT Neo’s specs yet, but the company previously confirmed it will feature 4D Vibrations and a 3D tempered liquid cooling system consisting of stainless steel and copper to reduce the GT Neo’s temperature by up to 15° C. 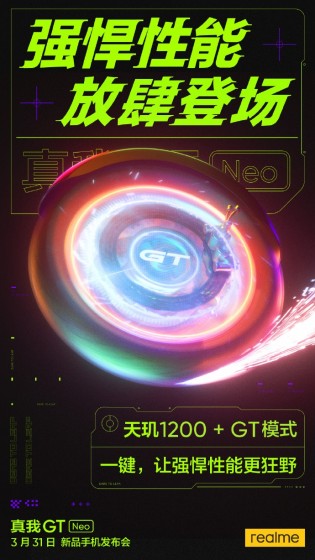 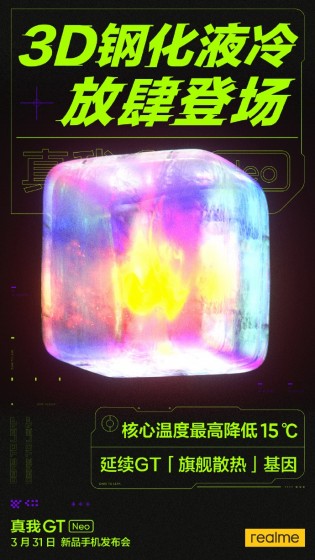 We are still six days away from the unveiling, so expect to see Realme confirm more features of the GT Neo to build hype around it.