Smartmi, also known as Zhimi, is a Chinese manufacturer of smart home devices. Just as expected from a Xiaomi subsidiary, Smartmi’s devices are reasonably priced, well designed, and they integrate with the other Xiaomi smart home products.

Smartmi’s headline products are the air purifiers they make – they offer a few distinct models on their Chinese website. Still, the single model they offer internationally has just had its Kickstarter campaign finished.

It’s aptly named the Smartmi Air Purifier, and this is the device we have for review today. We got our review unit early on while the crowd-funding campaign was still underway, but air quality around our parts was already excellent in the warmer months.

However, now that winter has settled in, the air outside has steadily deteriorated to levels where the Air Purifier really comes in handy.

If you have not heard of Smartmi before, that’s understandable. Their range of products is not that large. Smartmi’s website in English features a couple of standing home fans, a few humidifiers and a few electric heaters, and also a heated bidet seat. They also have a portable PM 2.5 detector, which can also be found selling under the Mijia brand. On the other hand, Zhimi’s website in Chinese shows a few wall-mount split-type air conditioners additionally, and a few Mijia devices related to air quality measurement.

Smartmi is a Xiaomi company. Their Air Purifier shares a lot of its design language with Xiaomi’s own air purifiers. This model here, though, is slightly more powerful than the widely available Xiaomi Mi Air Purifier 3H. The two have the same general footprint, albeit in a different shape. More distinctly, perhaps, Smartmi has placed the control screen on top of its device. 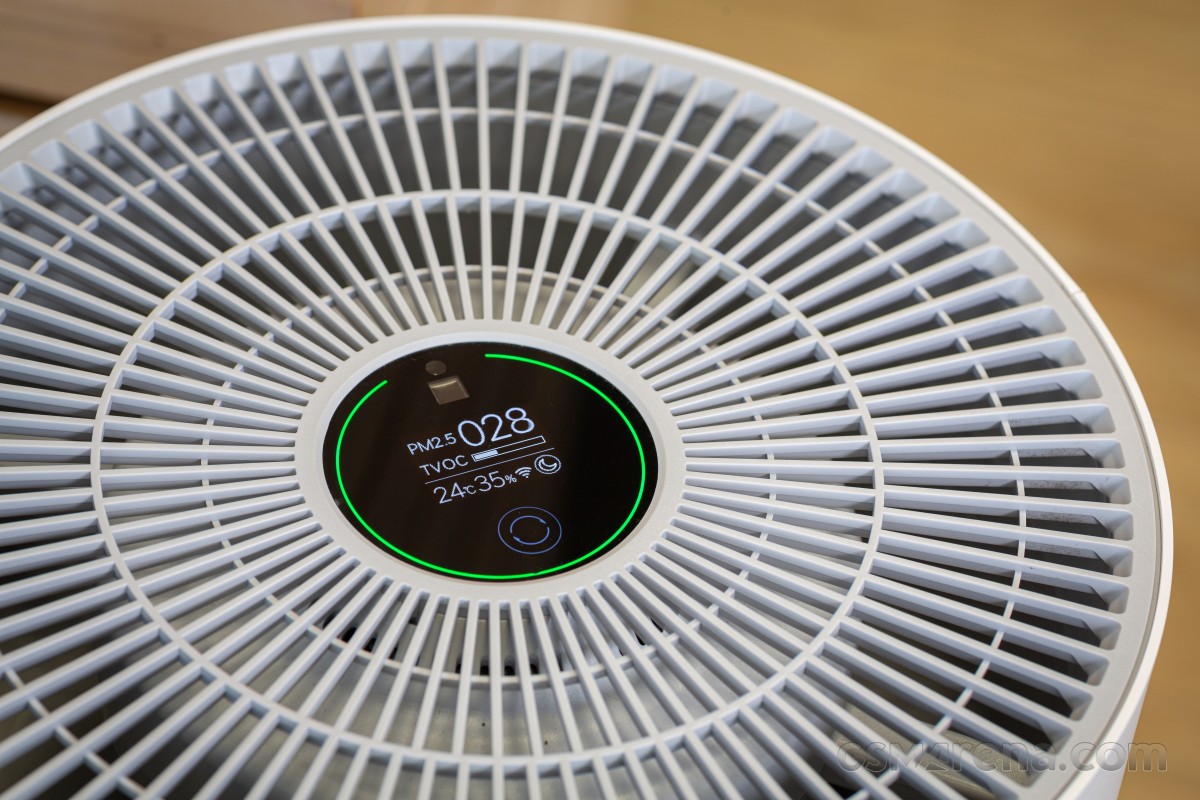 The jury is still out on which display placement is more practical. The Xiaomi’s side-mounted screen is easier to keep an eye on if you are sitting down, but the Smartmi’s top-mounted screen can be seen at any angle from any corner of the room as it doesn’t have to be turned to face you.

And since the air purifier is knee-high, I’d say that operating the controls is more comfortable.

The OLED screen and the simple UI on the Smartmi look and feel just like on any Xiaomi air purifier. The screen is not touch-enabled, but it is coupled with a touch button for turning the unit on or off or changing modes.

A colorful LED ring around the screen serves as a visual indicator of PM2.5/TVOC content in the air.

Upon a closer look, the screen will give you more detailed measurements of your environment variables – the actual PM2.5 level, the air temperature, and air humidity.

There are not many modes available – beyond Automatic fan speed, you can also have the Favorite mode with your preferred constant fan speed or the Sleep mode, which optimizes the fan speed for quiet operation. You can also turn off the screen if you sleep in the same room and the light bothers you – but only through the app.

In contrast to the Xiaomi Mi-branded air purifiers, the Smartmi Air Purifier’s top-mounted controls have an extra feature – gesture control. An IR sensor will spot your hand movement, allowing you to change modes with a flick of a hand (no touching involved). Yes, it is gimmicky, but it works. You can even turn off the air purifier by hovering your hand long enough above the sensor.

Your hand needs to be at a distance of about 10cm for the gestures to register. There is also a child lock for the controls for extra peace of mind, and you can disable the gesture control altogether if you like.

Of course, you can control all these options from the Xiaomi Mi Home app, too, and use it to integrate the air purifier as part of your smart home setup – even with support for Alexa or Google’s Assistant voice commands.

But despite the myriad of control options – I found myself rarely needing to resort to any of these, so I find them of little practical importance.

It’s because the air purifier is meant to be always on, so in time, you forget it’s even there until you open the window and bad air flows in. You can hear the fan immediately ramping up its speed in these cases, and the air quality indicator turns red, making the health threat abundantly clear.

I began to appreciate how having an always-on air measurement device really makes you aware of the quality of the air you breathe in. Air pollution is not always noticeable, and where I live, some days are definitely much better than others. So I really appreciated the peace of mind that I can air the apartment freely when the air pollution was low, and I made sure to keep the windows closed when the air outside was bad. 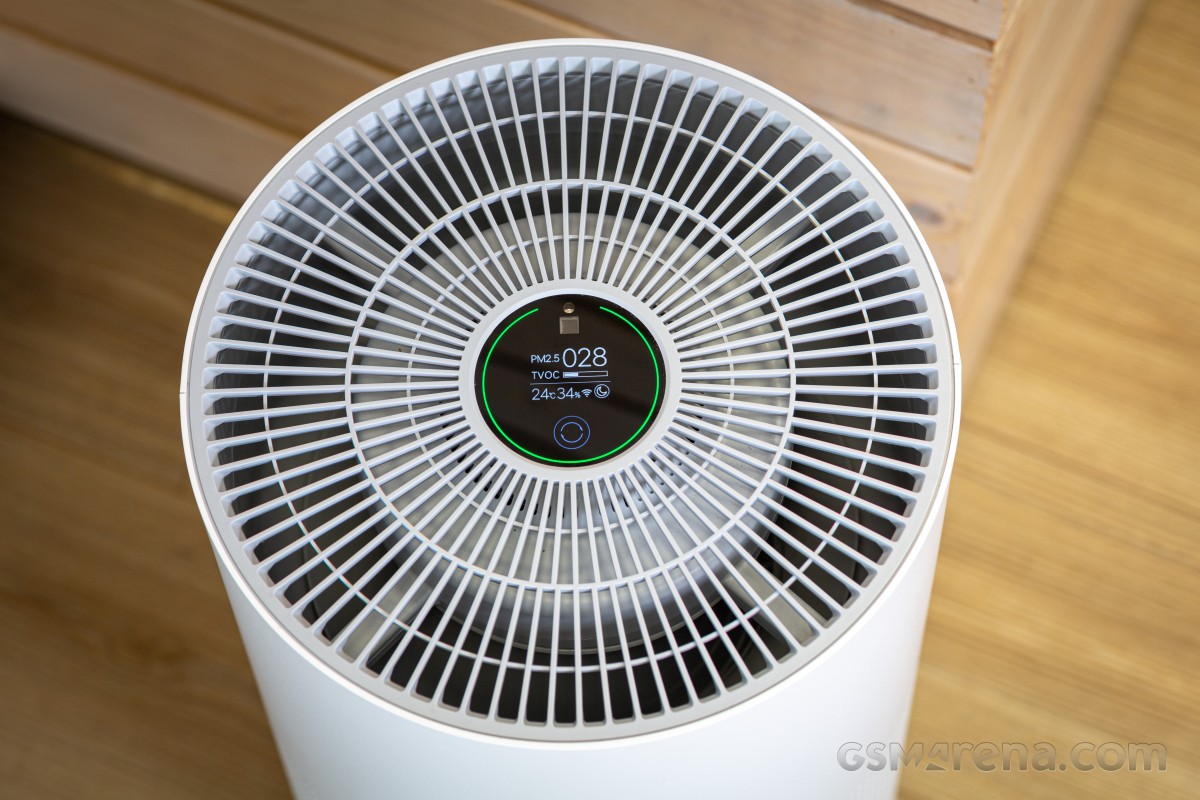 So the air purifier not only does manage to stay out of sight and keep a generally low profile, but it’s also always there to remind you of the quality of air that you are letting in from the outside – truly an air guardian – as Smartmi’s advertisement goes.

Does it do its job well?

Aside from the type of filter used, the single most crucial metric about the sort of a job an air purifier can do is its Clean Air Delivery Rate or CADR. It’s the amount of filtered air it can pump out expressed in cubic meters/hr or in cubic feet per minute. The higher the CADR, the faster it cleans the air in the room from airborne contaminants or particles. 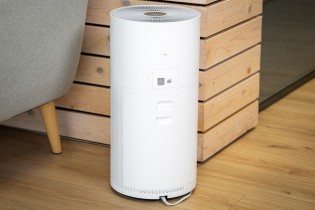 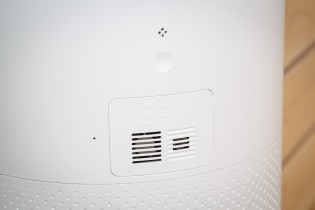 The laser particle sensor is at the back

The Smartmi’s CADR translates into a recommended room size between 29 and 48 m2. It all depends on how many times per hour, you expect the air purifier to recycle the room’s air volume.

Most sources agree that people with allergies or asthma require about 4 or 5 Air Changes per Hour (ACH) in the room they occupy, so for that group, the CADR 400 air purifier will serve a room at the bottom of that advertised range – so around 32-40 m2 (with a 2.5m ceiling height).

Air Changes per Hour (ACH) here does not refer to displacing the internal air with new air from the outside but to the number of times the entire volume of air present in the room can pass through the machine’s filters per hour.

The bare minimum for regular air cleaning for premises occupied by healthy individuals requires 2 ACH, so if you have an air purifier with a CADR of 400m3/hr always on and there is no constant source of bad air, the machine’s could even serve a room of 80 m2 (with a 2.5m ceiling height).

On the opposite side of the spectrum, if you have someone smoking in the room or constant smoke pollution from cooking or other burning stuff, you might need 8ACH, so the Smartmi air purifier would only be effective for an area up to 20m2 (with a 2.5m ceiling height).

You can see how it’s all relative, and you are really better off doing the math for your own room and intended use and then searching for the air purifier with the right performance rating.

I used the air purifier in a living room of about 45m2, and even when opening the windows caused the PM2.5 value to spike to the north of 150, the machine was able to bring them down to more reasonable values within less than 5 min or so. It won’t take care of real dust that settles on surfaces, but you can’t realistically expect it to do so.

Scientific tests I’ve seen online show that air purifiers are also good at removing airborne bacteria too. While I am not sure it would help eliminate viral agents such as the coronavirus, I am at least content that my family is breathing the cleanest air possible given the circumstances.

How much does it cost to buy and run?

Smartmi’s own website points to Amazon for purchasing their machine, and, truth be told, there are listings for it on all of Amazon’s regional websites, but they are all inactive (Amazon.com | Amazon.de | Amazon.co.uk). Still, I’d wager that wider availability is probably just around the corner. A note on Smartmi’s Kickstarter campaign page says that their production capacity has been dramatically hit by the coronavirus pandemic so this might explain it.

Unfortunately, price-wise we really can’t be sure how much this device will retail for. If Smartmi’s Kickstarter campaign is anything to go by, the air purifier should probably launch with a price of around €230/$230.

When you consider that the Mi Air Purifier 3H typically costs around €200/$200 and offers pretty much the same functionality and a CADR rating, which is only about 7% lower, it’s evident that the Xiaomi Mi-branded device is the better deal.

At the time of writing this, the Mi Air Purifier 3H’s price was slashed down to €170, and I could find it even more aggressively priced at Xiaomi’s resellers, so it’s really a non-contest here unless the Smartmi Air Purifier launches with a lower price than featured in their Kickstarter campaign.

Xiaomi also has a more powerful device, which is still the better deal – the Хіаоmі Мі Аіr Рurіfіеr Рrо has a CADR of 500m3/h at a sub-€200 price.

When you consider an air purifier purchase, there are relatively stable running costs involved, too. Besides electricity, there is also the filter cost, and these large HEPA filters don’t exactly come cheap. You could vacuum them on the outside to remove larger dust particles, but this won’t extend their lives, which can range anywhere between 3 to 12 months. 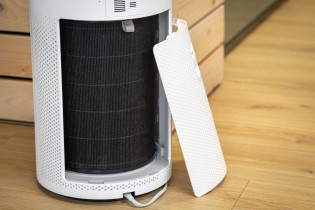 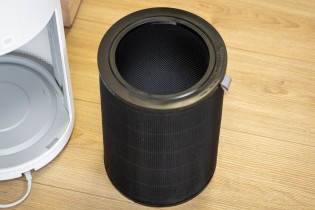 The Smartmi replacement filter is identical to the Xiaomi Mi Air Purifiers’ filters, so a replacement will run you around €30/$30. This means a running cost of about 5 bucks of filter costs a month (if we assume a 6month average filter life). This price is certainly not a significant amount, but be mindful of this factor when considering your purchase, especially if you are comparing offers for air purifiers by other brands that might price their filters differently or offer different filtering properties.

The Smartmi Air Purifier is a great product. It’s designed as good as most Xiaomi devices, it offers an excellent price/performance ratio, and it works as expected.

However, there is little differentiating it from the regular Xiaomi Mi lineup of air purifiers except for the top-mounted screen and the added gesture controls. We are yet to see its retail price as the Smartmi Air Purifier has not launched yet. Still, Xiaomi already has two great offers in the sub-€200 segment – one similar and one more powerful – so the Smartmi Air Purifier will have its work cut out if it is to put a dent in the market.